Adriana is on a mission to Mars 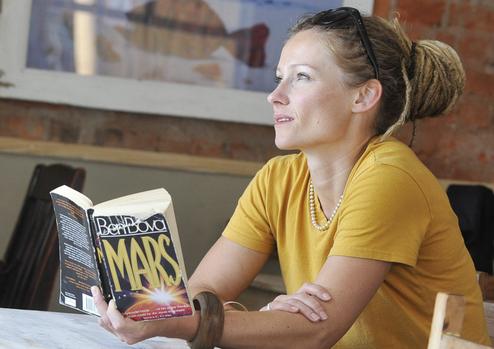 Dr Adriana Marais is one of 100 selected candidates vying for a one-way ticket to Mars. Gasant Abarder spoke to her.

Cape Town – Right now there are people having sleepless nights contemplating a move to another city for a job or to be closer to family. But for Dr Adriana Marais, such a potential move is literally light years away – to another planet, to be exact.

You see, Adriana is on a mission to be among the first people to settle on Mars. In 2013, she applied to be a candidate astronaut on the privately funded Mars One project. She is now one of 100 selected candidates around the world. This number is expected to be narrowed down to 24 by next year. The 24 will be sent to Mars, four at a time in six groups after a decade of training. The date for launch is 2026. They won’t be returning home. It’s a one-way ticket.

“There are people among the 100 who are married with children and have still volunteered for this trip. I’m not married, I don’t have children…of course, we’ll all be leaving people behind, but I think I’m overwhelmed by the support both friends and family have given me. I think they understand that this kind of crazy mission is just my cup of tea.”

As a theoretical scientist and quantum biologist, Adriana, 33, from Woodstock, is on a quest to find the origins of life. Going to Mars represents the ultimate search for answers.

“I read about it in a newspaper article in Durban. That was in January 2013 and the application deadline was for the end of August, so I had a bit of time to think about it in those months. But there was never a doubt in my mind that I would go all the way with this. It’s been four years that I’ve been involved with the programme.”

Last year, she was one of 15 recipients worldwide of a L’Oreal-Unesco Rising Talent Grant for Women in Science Award following her research into the origins of life. This year, she is the young researcher recipient of the Royal Society of South Africa Meiring Naude Medal for high-impact research in the field of quantum biology. In June, she attended the prestigious 66th Lindau Nobel Laureate Meeting as one of 400 most-qualified young physicists selected worldwide.

Adriana is involved in the promotion of science and space exploration as special project co-ordinator for the Foundation for Space Development South Africa.

“In the 10 years of training we’ll be able to learn different skills that you will need there – but of course, what you bring after the outcome of the training is also important. I have absolutely no doubt in my mind that I can do it. Ever since I read that article and my mouth went dry, I knew this was it: I was going to spend the rest of my life on Mars.”

“I really believe that will be the probable outcome of my life. Being a problem solver as a theoretical physicist is what I love doing, finding a challenge and solving it. I’ve often been asked: ‘Would you love to live in a utopia?’ And I would say, absolutely not, I would be out of a job because solving problems is exactly what I love doing.”

“I think you have to be a people’s person, because at first there will be only four people who will arrive and they will have to offer extreme personal support for each other.

“There needs to be very good collaboration and you have to be a leader, a fellow, a teacher, a pupil, a colleague, a friend and everything to people. Being a people’s person and having a sense of humour will also be extremely important.”

Adriana is not in short supply in the humour department. For the past 10 years, she’s been practising martial arts – skills, she jokes, could come in handy on Mars.

“I think it might come in handy for aliens or any rogue astronauts. Or when we’re fighting over a Mars Bar. I love spending time in nature, spending time with friends, drinking wine – which will not be available on Mars. I discussed with the distiller of Groot Constantia the possibility of making wine on Mars. I’m French Huguenot, so I’d be keeping up the tradition of making wine in foreign places.”

But how do close relatives and friends begin to fathom a loved one taking a one-way trip and never seeing them again? They have all been very supportive, says Adriana.

“Sacrificing the rest of my life on Earth would be a small price to pay to be one of the first people to establish a new world on Mars. I think the potential contribution I would be able to make as one of those first citizens would be a far grander outcome than any comfortable life I would have lived out on Earth.

“When I first told my mom on the phone, quite casually: ‘Oh, by the way, I volunteered to go to Mars’, she said: ‘Oh, will you have communication there?’ I said yes. She said: ‘Oh, okay, see you next week.’

“Then she Googled it and thought I was a bit mad, but realised it did exist. My dad has actually gone ahead and written a sci-fi novel based on the Mars One project, with some very outlandish alien dolphins and whales by the end of the book.

“My mom, who did some genealogical research of our family, was also the first one to point out that our ancestors were explorers and cited an example of one who took a treacherous trip somewhere – a one-way trip.

“I don’t think I would have been in a position to volunteer so wholeheartedly for this position without having had their constant support my whole life in most of the crazy stuff I’ve done.”

The actual mission is a long way off. It is hoped that by next year, the Mars One project will fly the 100 candidates to an as-yet-undisclosed location.

The two-week selection to narrow it down to the final 24 astronauts will be televised in a kind of reality show to top them all. It will feature a series of group challenges and a seven-hour interview with a panel of experts. Once the 24 are chosen, an intensive 10-year training programme will follow before the first four astronauts are launched. Adriana is off to Mexico next month to present research in quantum astrobiology, “which is the search or investigation of the building blocks of life and space, like amino acids and nuclear bases which have actually been found in meteorites, comets and possibly space, floating around”.

“Elon Musk will also be at the conference, presenting for the first time plans for a city on Mars. I read somewhere he wants a city of several hundred thousand people living on Mars. Things could get crowded – very crowded.

“The planet in orbit around it seems very similar to Earth and may have liquid water on the surface. The details of this will be announced at the end of the month.”

It is her quest to find the answers to questions that the science within our grasp has been unable to answer, that motivates Adriana. But more than that, she wants to make a contribution to sustaining humankind for the generations who will follow hundreds of thousands of years from now.

“I think now that climate change is the hashtag of the day, we need to look back a few billion years and realise that planets are in a perpetual state of change.

“Just one billion years ago, Venus – we think – had liquid water on the surface and now Venus is over 500°C on the surface. That is extreme climate change.

“Mars, as far as we can tell, had oceans four billion years ago. Now it has an average temperature of -15°C and very little water on the surface. That is an extreme climate change.

“We can look forward to drastic climate change on planet Earth as well. The sun will not last forever and you may say these problems won’t concern you, they’re too far in the future.

“But 95 percent of species that have ever existed have gone extinct.

“The origins of life is the least understood question we are trying to answer scientifically at the moment. We understand more about the origins of the universe. We have a mainstream, accepted theory – the Big Bang theory – about how the universe emerged.

“There is no one theory of the origins of life that has any more traction than the other. We just don’t know.

“I think, in terms of how we should be behaving as living citizens, we should be doing our utmost to protect this phenomenon of life, which we don’t understand very well. It could be that life is supported on Earth uniquely. I don’t believe this is true. I believe we may find evidence of life on Mars or somewhere in the solar system.

“But I think the lack of respect with which we treat life is not doing justice to this extremely magical and mystical phenomenon.

“We can understand what life is scientifically, but we’re far from understanding how it emerged. But using physics and chemistry, we can eventually describe how biological systems emerged.

“I give a lot of talks to children at schools, so I’m always very careful about comments on religion. I think religions have far more in common than they have differences.

“If we do find evidence of life on Mars, all the greater would be the glory of God. I’m not sure that God limited his creation to planet Earth. I think we may be on the brink of discovering even greater things.”

* Gasant Abarder is the editor of the Cape Argus.