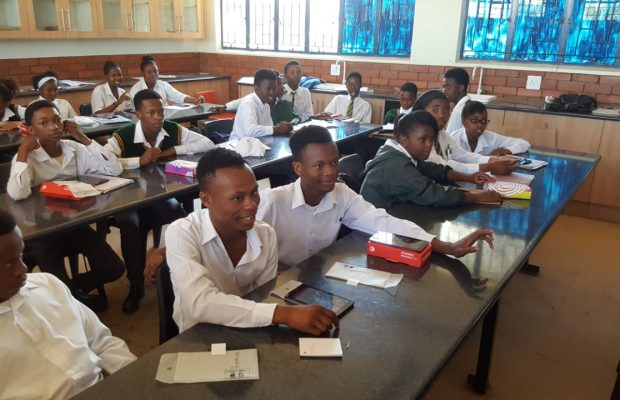 Digital education is becoming a top priority for businesses and organisations in South Africa to help boost the possibilities for future generations.

Johannesburg, South Africa – In a boost for South Africa’s ailing education system, business heavyweights are backing a plan to place a fully resourced e-learning tablet in the hands of one million of the poorest pupils within the next five years.

Already MTN, Oxford University Press, Cambridge University Press, Shuter & Shooter and WIZZR Technologies have signed on with the organisation spearheading the plan, the Closed-loop Learner Network (CLN), resulting in a successful trial roll-out of the tablets – called Omang – to 1,000 pupils at no-fee schools in the Free State late last year.

Based on the trial’s success, and together with the provincial Department of Education, a further 20,000 pupils at no-fee schools will be benefitting from the initiative during 2019.

MTN provides free connectivity for the tablets, while CAPS-approved textbooks for grades 10 to 12 pupils are pre-loaded onto the devices thanks to international software developers WIZZR Technologies and the three textbook publishers. CLN, in turn, ensures that high school pupils receive the Omang devices, complete with textbooks, tutorials and white-listed online resources to assist them in their studies.

The initiative was celebrated at a gala dinner in Bryanston last week [Thursday, March 14th], where private sector heavyweights including MTN’s David Mphelo and SAP Africa head of innovation Dr Adriana Marais – who is a candidate for the Mars One human settlement mission – addressed the audience of 150 delegates. Included in the line-up of speakers were MD Ramesh, regional head of the multi-billion dollar agribusiness Olam International, as well as African Industrialist of the Year, Jendamark MD Quinton Uren.

CLN had already begun building the infrastructure required to implement President Cyril Ramaphosa’s vision of a tablet device in every pupil’s hands within the next six years, CLN founder Ajit Gopalakrishnan told the audience. South Africa currently ranks 54 out of 63 global economies in the category of education and training, according to the latest IMD World Digital Competitiveness Rankings.

“This is not about giving tablets to kids. We aim to become the Facebook of education and to gain in-depth insight into the next generation. It’s about seeing the human potential – and the business opportunity – in including the masses in the economic equation,” said Gopalakrishnan, adding that dedicated social impact funding from the private sector was essential to extend the initiative’s reach across South Africa.

Mphelo said education was one of two major focus areas for the MTN Foundation and that it was vital to use the available connectivity to bridge the digital divide.

“We have the scalable ready network and infrastructure. Why aren’t we using that infrastructure to unlock the potential of all South Africans no matter where they live?” Mphelo said.

Quantum physicist Marais said connectivity had become an essential resource like water and food and that a sustainable approach to all of these resources was critical for the future. She added that it was important to support the dreams of young people but that tools such as science and technology were needed to make those dreams a reality.

“CLN’s Omang initiative is one of the crucial projects around education and connectivity that will inspire the next generation of thinkers and make us proud to be human,” said Marais.

Uren, whose company has acquired a 41% stake in Omang, said Jendamark already had the technology platform in place to support the agenda and unlock potential.

“Industry 4.0 is the perfect platform to solve specific educational problems and inspire hope. This tablet device can affect a major change in education. Here we can really change lives and the future of our country.”