‘Dream big, reach for the stars’ 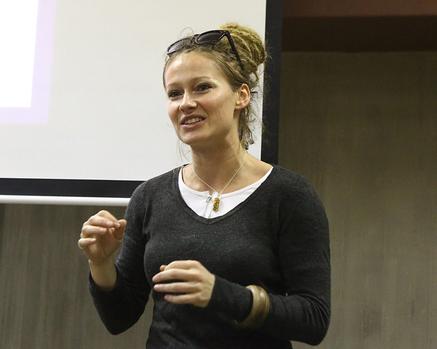 Durban – Mars One candidate, Dr Adriana Marais of Pietermaritzburg, said it was surprising that people found the idea of permanently settling on Mars crazy. Marais was in Durban on Thursday she spoke to staff at Independent Media in Greyville about space and her dream of living on Mars.

A community likely to agree that a one-way ticket to the red planet was “logical and inevitable” will gather at the Astrobiology Science Conference 2015 in Chicago next week.

Marais will be there to present a paper titled; An open quantum systems approach to the formation of prebiotic molecules. Aptly themed; Habitability, Habitable Worlds, and Life, the conference is an exciting opportunity for the quantum biology researcher.

She will also share her knowledge with pupils at a winter enrichment school in Johannesburg next month. Marais recently joined Africa2Moon, a mission initiated by the Foundation for Space Development, to “inspire the youth of Africa to believe they can reach for the moon by reaching for the moon through education and science.”

The foundation’s chief executive, Jonathan Weltman, said they asked Marais to join Africa2Moon because she was, “a wonderful spokesperson to promote African space efforts”.

“We brought her into the programme because she is an incredibly well-educated and bright person who has a great passion for space. The fact that she is willing to move to Mars for ever is an incredible statement,” Weltman said.

The pair, along with Africa’s “first black astronaut” Mandla Maseko, will highlight the continent’s involvement in public space programmes at the winter school. This was meant to spark interest in space among pupils with a long-term goal of seeing them have a hand in developing space research and exploration said Weltman.

“This inspiration needs to be tangible and visible. We can achieve these things, we have the capabilities but they are not well publicised.

“It’s one thing for an African spacecraft being an element of a child’s imagination and another for them to walk outside and look up at the moon and see Africa’s contribution to the world’s understanding of lunar science,” Weltman said.