Is Mars the next cool holiday destination? 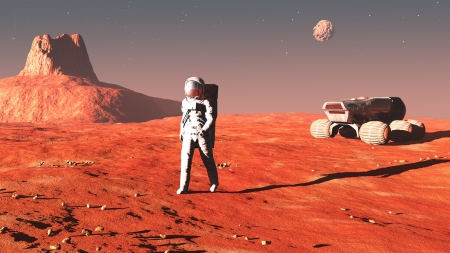 Man’s desire to explore space has created plot lines for science fiction writers for centuries. 50 years ago, the stuff of science fiction started becoming reality with the advances in technology that allowed us to land on the moon. Today, the colonisation of Mars is not only looking like it will become a reality, it’s actively being pursued by some of the brightest minds on Earth.

When the first humans set up shop on the surface of Mars, our species will never be the same again. And, while all of the Mars-related projects are being pursued by people representing many countries all over the world, the colonisation of Mars may well have a South African flavour.

Mars One, a private non-profit organisation set up by Dutch entrepreneur Bas Lansdorp, is in the process of selecting the six teams of two men and two women who will travel to the red planet. The project intends to settle humans on Mars by 2025. The teams will be selected based on a number of criteria, and there are currently 100 candidates left in the running from the initial 200 000 volunteers. One of these is South African Adriana Marais, a theoretical physicist doing research in the field of quantum biology.

Another South African active in the plan to colonise Mars is entrepreneur Elon Musk. Not only will Mars One use the technology his company Space X is developing for the specific purpose of sending it to Mars, but he is planning to bring the costs of space travel down to a point at which regular trips to Mars will be completely viable.

Last week, Space X achieved its latest success in this regard. The Falcon 9 rocket became the second in the Space X fleet to employ a re-used booster to fly. Until now, each rocket sent into space was made of components that could only be used for a single round-trip. SpaceX has recovered nearly all the boosters it launched this year, and successfully re-used three of them, proving the viability of Musk’s vision to provide a fleet of affordable space-delivery vehicles.

By launching, landing, and refurbishing boosters, Space X aims to massively cut the cost of reaching space, and Musk has publicly stated that his long-term goals include colonising Mars, Jupiter’s moon Europa and Saturn’s moon Enceladus. This will only be achievable if the commercial side of his dream is realised.

Musk wants to build a self-sustaining city on Mars, and aims to enable the first flight to the red planet as soon as 2023. That is a mere six years away. He has also proposed making fuel on Mars to help make the travel costs feasible. Should he be successful in this endeavour, human beings will be set to explore further into space. Interplanetary fuel-filling stations on Enceladus, Europa and even Saturn’s moon Titan would enable us to travel to places such as the Kuiper belt and the Oort cloud.

This all sounds very futuristic and many people doubt the ability of Space X to achieve these lofty goals. However, the technology is developing rapidly, and the Falcon 9 rocket proves the viability of Musk’s vision. Space X has already done more to make the dream of humans living on Mars a reality than any other organisation in history, including NASA, so who’s to say Musk won’t be able to create a interplanetary highway with filling stations, allowing humanity to emulate the science fiction classic Star Trek and boldly go where no man has gone before?