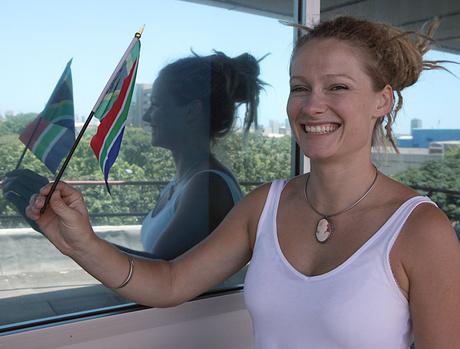 Since the age of 6, Adriana Marais had thought that, given the opportunity to get on to a spaceship and never return to Earth, she would take it.

For the 30-year-old Durban quantum biology PhD student, that dream might just become reality. Marais is one of 25 South Africans who have been short-listed for the second round in the application process for the out-of-this-world experience – the chance of becoming a pioneer on Mars, the Red Planet. She will be part of a planned human settlement, and has been shortlisted by Dutch-based company, Mars One from more than 200 000 people, down to 1 058 people from 140 countries.

And once the spaceships leave, there will be no way to come back. “I feel like I’m somehow meant to do this,” the University of KwaZulu-Natal (UKZN) doctoral student and lecturer said in an interview.

“A one-way trip is a huge sacrifice, but it’s a sacrifice I’m prepared to make for this idea, this adventure that would not be my own, but that of all humankind.” For Marais, seeing the Mars One advert last April for the adventure was like fate being realised and she took the first step. She still has to proceed through three additional rounds over the next two years.

In the end, six teams of four individuals will be selected for training over about 10 years, for life on Mars. Marais likened the journey to that of her ancestors arriving in South Africa in the 1600s. “It took five months for them, by ship, to get to an unknown land with no way of affording a return trip.”

After completing her schooling, Marais studied at the University of Cape Town after which she completed her masters in quantum cryptography. She is currently completing her PhD in quantum biology. Marais is also a part-time lecturer at UKZN where she is part of a quantum research group – the only one of its kind in Africa – established by Professor Francesco Petruccione.

In 2010, she was presented with a fellowship award at the Women in Science Awards by the Department of Science and Technology. Last year, she received the L’Oreal-Unesco regional fellowship award as well as the Best PhD Biophysics Talk at the South African Institute of Physics Conference. With her winnings, Marais has managed to travel extensively, attending conferences and expanding her knowledge on quantum biology in the international sphere.

But these achievements pale in comparison to what Marais can achieve if she is selected for the Mars One expedition. The funding for the programme will be largely through the selling of TV rights for the expedition with cameras following the selected 24 from the start of the training through to their eight-month shuttle trip, following their life on Mars.

The participants will be sent in teams to Mars, starting from 2024, after extensive training, which will involve basic medical procedures, repairing components of the habitat and learning to grow their own food. On Mars, water – which is in ice form – will be extracted from the soil. Part of the water will be used to produce oxygen. The first colonists will not be encouraged to have children, as medical facilities will be limited at first.

Marais said she had the characteristics demanded of the applicants, which included resilience, adaptability, curiosity, an ability to trust, creativity and resourcefulness, as well as a unique research passion, which is the search for evidence of the earliest life forms.

After submitting a medical report by March, she will wait to hear what the next step in the process to becoming an astronaut will be. “My parents are, of course, not happy that it would be a one-way trip. But they understand my sense of adventure, and said I must have the explorers’ blood of our ancestors,” she said.

“Most of my friends think it’s crazy and I haven’t yet told my colleagues.” Responding to what she would do if she fell in love in the 10 years before leaving, Marais said: “I think with life you just have to cross whatever bridge when you get there. “I wouldn’t want to let my team down. I believe when you start with something, you must finish it and I’ve started with this. The last generation had the moon mission, but there’s been no new space revolution,” she added.

“Mars will be our next venture.”