Mars One hopeful speaks at Aerospace 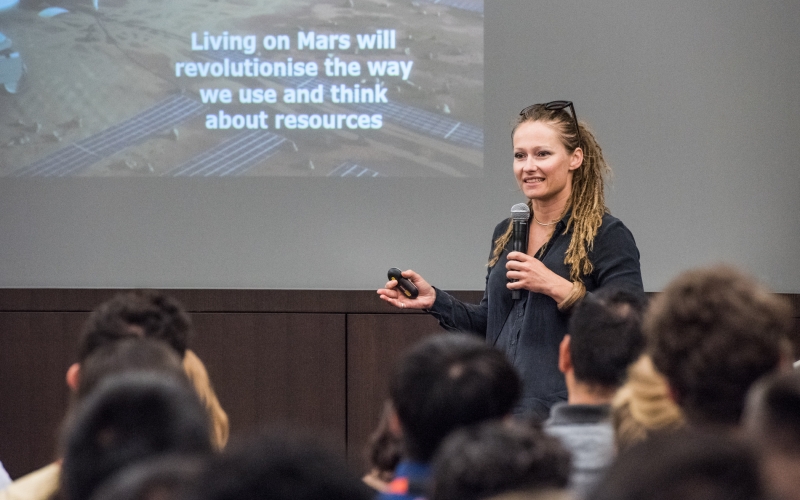 Out of 200,000 applicants worldwide, Dr. Adriana Marais is one of 100 finalists chosen for the Mars One project, which aims to send humans to the red planet in the next decade. Marais spoke at an Aerospace event about why she wants to make a permanent move to Mars.

A potential Mars colonist spoke to a full house of Aerospace employees and interns during an Aerospace special event on Monday, July 9, discussing plans for a future manned mission to Mars, extraterrestrial life and her motivations for making the one-way trip.

Dr. Adriana Marais, a South African physicist and quantum biologist, is currently one of 100 candidates selected from a pool of over 200,000 applicants from around the world for the Mars One project, which aims to send teams of four to the red planet in the next decade. Marais framed the talk with what she referred as the three biggest unknowns: life, time, and space. Through the mission, Marais hopes to better understand these unknowns, while inspiring future generations of scientists, engineers, and explorers to confront challenges on Earth and beyond.

Marais spoke about her research in quantum mechanics and astrobiology and seeks to use the mission as an opportunity to study “the fundamental characteristics of life, and the kinds of environments that facilitate its emergence.”

Beyond the scientific value of colonizing Mars, Marais believes the mission would have immense societal value for the Earth-bound population. Survival in the harsh Martian environment, Marais said, would demonstrate cutting-edge sustainability practices in alternative energy, food production, and manufacturing that could be solutions to “poor resource management” on Earth.

Citing the impact of the moon landings on the increase in STEM degree graduates, Marais hopes that the Mars One mission will have a similar effect in inspiring future scientists and engineers. “The power of achieving what it is on the edge of our capability inspires many of us to go out and drive progress,” she said.

No Return Ticket Necessary for Mars One

Addressing the fact that she would not return from a mission to Mars, Marais said that she takes inspiration from her ancestors, who made, what was at the time, a one-way trip to colonize South Africa in the late seventeenth century. More than 300 years later, Marais seeks to carry on the tradition of exploring and settling the unknown.

“Space exploration is the pinnacle and characterization of what it means to be human,” Marais said. “We all need to live with pride and get involved in things that take us out of our comfort zone.”