‘Over the moon’ about Mars trip 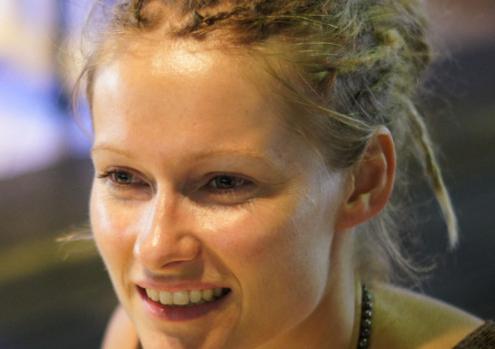 From more than 200 000 applicants across the world, Durban’s Adriana Marais is one of 100 potential astronauts shortlisted for a one-way expedition to Mars.

On Monday morning it was officially announced by the Mars One team that the 31-year-old quantum biology researcher was through to the third round of the application process, which could see her become one of 24 pioneers on Mars.

Mars One is a non-profit organisation that aims to establish the first human settlement on the Red Planet from the year 2024. The process thus far has been done completely online, with candidates able to interact over social media.

The initial advertisement calling for applicants was sent out in April 2013 and, from the 200 000 applications, 1 058 progressed to round two, although several dropped out, leaving 660 candidates. Those selected participated in an online interview with one of the organisers, Dr Norbert Kraft, the chief medical officer for Mars One.

In an exclusive interview with the Daily News, Marais said she was “over the moon” after finding out she was one step closer to taking the eight-month trip to Mars.

“For the second round, they interviewed all the candidates over two months,” explained Marais, who said she had to prepare by reading up on Mars as well as the Mars One programme. She said the 10-minute interview was hosted in Stellenbosch by the National Institute of Theoretical Physics, because of the reliable internet connection. The institute also funded Marais’ PhD in quantum biology, which was submitted in November last year.

“I was really nervous, but the interview went really well. He asked three questions, one of which was ‘If I could go home after three years on Mars, would I?’ I think my answer to that clinched it.” Marais responded that she would be going on the mission long-term, and three years wouldn’t be nearly enough time to get into her research, which focuses on the origins of life.

She was also asked what her friends’ and family’s reaction had been on hearing about her decision to go to Mars. “Everyone has been really supportive and enthusiastic. Anyone who knows me just said it makes sense for me to do something like this!” she laughed. “My mom is my biggest supporter, retweeting everything I tweet, and my dad is constantly passing on Mars research and books to me.”

The 100 candidates have two more rounds to get through before the final 24 begin intensive, eight-year training involving surviving in harsh conditions, basic medical procedures, repairing components of the habitat and learning to grow their own food.

The details of what the candidates will have to do in the forthcoming rounds are vague, with no set dates; however the third round will involve interviews which will be aired on television as well as group challenges to display their sustainability. This will mean that those selected will finally get to meet each other, as well as the organisers, face to face, presumably in the Netherlands, where the NPO is based.

“It will be a big deal to meet everyone,” said Marais. “It’s been difficult to believe this is actually real, with it all online.”

In the interim, Marais will continue her work with UKZN’s quantum research group, from Cape Town, beginning this year, where she will interact with others in her field. She is also very excited about the recently announced Africa2Moon project, which aims to send the first African probe to the moon, the footage of which will be displayed in classrooms across South Africa in an attempt to get students interested in science.

“Mars One is one of a number of ambitious initiatives like Africa2Moon, the Indian MOM (Mars Orbiter Mission) and the Rosetta comet landing, which are contributing to a renewal of interest in space exploration,” she explained, adding the Indian MOM cost less than the making of Hollywood blockbuster, Gravity.

Marais will also be raising funds through public speaking events to pay the R500 000 or so for one top South African matriculant, who could not otherwise afford it, to study a BSc at the University of Cape Town, starting in 2017. She said if she was not selected as one of the pioneers to Mars, she hoped to continue to contribute to the programme, although going would be the realisation of a lifelong dream.

Summing it up on her Mars One profile page, Marais stated: “I applied to go and live on Mars because the allure of the unknown to me has always felt far more powerful than the comfort of the known. “I would be prepared to sacrifice a lot for this idea, this adventure, this achievement, that would not be my own, but that of all humanity. Even not returning to Earth.”