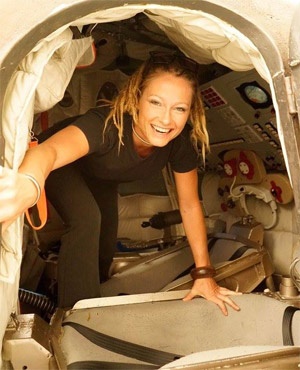 Durban – The South African scientist hoping for a one-way ticket to Mars will get her chance to prove she has the right stuff later this year.

In the meanwhile, Adriana Marais is keeping herself busy training for the Two Oceans ultra marathon in March, and as a senior Kung Fu student with the Chinese Martial Arts Centre. She was one of 100 candidates worldwide short-listed for the Mars One project, which aims to establish a human settlement on the red planet. In September, they are due to undergo a three-week selection process at an as yet unknown location. The aim is to whittle them down to the final 24.

The three-week selection will involve three stages – five days of group challenges, living together in isolation from the outside world for nine days, and a four-hour interview. Should she not make it, Marais intends continuing her work.

“I’m a researcher, so I’ll probably continue doing my research on whichever planet I end up on.”

The final 24 will undergo 10 years of training to prepare them for the trip. Out of this group, a team of two men and two women will be chosen to be the first to depart for Mars in 2026. A new group of four will be sent every two years to expand the settlement.

Meanwhile, Marais is continuing to delve into quantum biology and the molecular origins of life as a postdoctoral researcher at the Centre of Quantum Technology, a research group at the University of KwaZulu-Natal. She was keeping up to date with recent discoveries in science and space that may have relevance for the project, she said on Monday.

Last year she did a 10-day silent retreat with her mother, to see how she responded to periods of isolation. “I thoroughly enjoyed the not talking part, actually,” she said. Her parents were supporting her goal, and her father was writing a science fiction novel partly based on her experiences.

Her one driving passion was answering the question “what is life?”, both for scientific reasons and to better understand what it meant to be human.

“Finding evidence of life on another planet would be the most profound scientific discovery possible, understanding who we are, where we come from, and where we are going.” She told an audience at a TEDx conference in Cape Town in August last year that to her the allure of the unknown was more powerful than the comfort of the known.

“I am prepared to give up my life on Earth for the unprecedented contribution I would be able to make to the sum of human knowledge from a new world,” she said.

Everybody on Earth was the survivor of a one-way trip. She pointed out that she was part of the 11th generation of French Huguenot refugees, who first arrived at the Cape following a five-month trip from Europe in 1688.