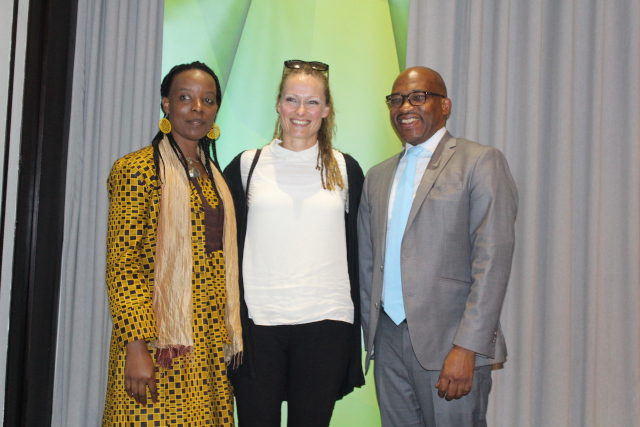 The South African Technology Network (SATN), a consortia of Technology focused Universities, are hosting an international conference addressing the role of universities in the Fourth Industrial Revolution. The conference is held at the Elangeni Hotel, Durban from 11 September 2018 to 13 September 2018.

The Durban University of Technology is one of the key sponsors of the SATN conference, as one of the technology focused universities.

The conference seeks to respond to our rapidly changing world and technology that is advancing at an unprecedented rate. The popular vinyl’s and cassettes from the 80’s are replaced by digital downloads and live streams. Typewriters have been relegated to the status of T-Rex and smart phones, mobile devices and apps are dominating consumer and commercial interest. It’s the Internet of Things, Big Data, Robotics and Cyber-Production Systems.

The SATN conference is focused on having relevant conversations stimulated by world class presenters and researchers. The role of universities is also at the centre of discussion related to the Fourth Industrial Revolution. One of the key speakers during day one of the event was Dr Adriana Marais, Theoretical physicist, Head of Innovation at SAP Africa and aspiring extra-terrestrial (100 to Mars Astronauts), who shared her talk on her mission ‘The Allure of the Unknown “The reason I want to go to Mars’.

Dr Adriana Marais, believes that we are living at a unique point in the history of life on Earth. In her presentation she talks about her research in quantum biology and the origins of life, the technology required to sustain terrestrial life on Mars and the various projects aiming to send crewed missions there.

Since childhood, Dr Marais has dreamed of living on another planet, and is currently one of the 100 Mars One Project astronaut candidates in the running to move to the red planet in the next decade. She is grateful for the platform she has as a scientist, innovator and Mars One candidate to inspire school children, teenagers and adults around South Africa and globally to get excited about the future, believe in their dreams.

“Mars is the only planet that is currently thought to possibly be able to support human life and the programme will be humankind’s first step to become a multi-planetary species. I believe that finding evidence of life on Mars would be one of the most important possible discoveries for humanity.”

“I would be prepared to sacrifice my life on earth for this idea, this adventure, this achievement, that would not be my own, but that of all humanity,” said Dr Marais.

If selected, Marais will be required to undergo numerous assessments, including performing tasks to overcome challenges in teams, as well as undergo a final isolation screening process.

As a researcher, one of the things she is most looking forward to when she gets to Mars is being able to be one of the first humans to document the experience of living there. She said the exhilaration of the possibility of contributing to the discovery of evidence of life on Mars would get her out of bed each morning.

Her talk also focused on the role technology would play once the Mars One project takes place in 2020.

She added that the role of scientists, engineers, researchers, were all key players for the one-way trip and Elon Musk has been designing the hardware in order for this project to happen. “The key question is how to survive on Mars. We will require solar power to reduce the cost of developing equipment, find ways to manage water and of course look at innovative ways to grow food in a controlled environment with the use of advanced technology,” she said.

She stressed that from the 100 project candidates for Mars One, it will be narrowed down to 24 and if she was chosen, she hopes to be instrumental in being one of the technological pioneers for the pilot project for Mars, and leave a legacy in that respect.

“Let’s go forth and beyond,” she said excitedly.

Another exciting speaker was Professor Seeram Ramakrishna, Director of the Centre for Nanofibers and Nanotechnology; National University of Singapore.

He pioneered nanotechnology and materials circular economy in Asia. He is a member of World Economic Forum (WEF) Committee on Future of Production-Sustainability. He chairs the Circular Economy taskforce. He is a Highly Cited Researcher in Materials Science (Clarivate Analytics). Thomson Reuters recognized among the World’s Most Influential Scientific Minds. A European study placed him among the only 2,610 researchers with H index over 100 in the history of science and technology.

“Innovation and Technology adoption will decide which countries will emerge in the league table of economic power in the long run. 20% Of the per capita GDP growth is driven by labour and capital. 80% Is determined by how rapidly applying new technology to increase productivity and customisation of markets,” he said.

He also stressed that there needs to be conscientious drive for sustainable industries and to establish firms specialising in recycling technology.

Day one concluded with an official welcome by DUT’s Vice-Chancellor and Principal Professor Thandwa Mthembu, at a cocktail evening at the Elangeni Hotel.

“The fact that we back in Durban for SATN reminds of years ago for the inaugural SATN conference in 2008. So I’m glad we back in Durban for this conference on the industrial revolution. So welcome to Durban. The only thing I can say that it’s about one place, where the Vice-Chancellor can have an office under the umbrella by the beach. I hope you will be in reach with the discussions on how to shape and address challenges presented by the fourth industrial revolution,” he said.

Day two will look at the University industry partnerships in the changing world of work.