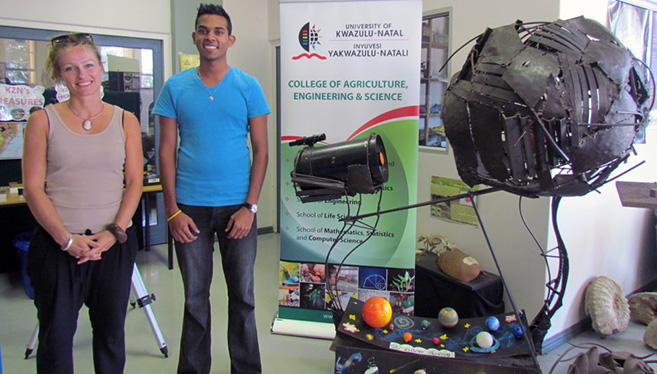 The last time man set foot on another planet was during the Apollo 17 moon landing in 1972! Now, thanks to the Mars One project, people could be walking on Mars  in 2024 for the first time… and two UKZN students may be among them!

Ms Adriana Marais, a PhD candidate at UKZN’s Centre for Quantum Technology, and Mr Divashen Govender, a BSc student studying Applied Mathematics and Physics, have both made it into the Mars One final 100 as a result of personal online interviews with Dr Norbert Kraft, the  Chief Medical Officer of the mission.

During their interviews, Marias and Govender displayed the required pioneer qualities, such as team spirit, an understanding of the risks they may face and motivation to be a part of the mission.

Co-founder and CEO of Mars One, Bas Lansdorp, said of the candidates: ‘These aspiring martians provide the world with a glimpse into who the modern day explorers will be.’

The Mars One initiative, run as a not-for-profit organisation in The Netherlands, has released its list of the final 100 candidates in the running for the one-way trip to Mars, a list whittled down from the initial 202 586 applicants from around the world.

Only seven of the 50 men and 50 women selected are from Africa with five being from South Africa.

The third round of the selection process will require candidates to form teams of four who will train for the challenges they would encounter on Mars if they are the final team selected to begin colonisation of Mars in 2024. Their performance as team players will determine their selection or non-selection in the upcoming rounds.

The organisation has successfully sold the television broadcast rights to DSP (an Endemol company), well known for broadcasting Big Brother, who will have exclusive rights to follow and screen the final selection processes and mission. The reality show, which is tipped to be a “media spectacle”, will drive the Mars One project and hopefully fund the final mission, which four people will leave for Mars on a one-way flight to begin the early stages of colonisation of the Red Planet.

Marais (31), whose research in quantum biology and early childhood dreams of going to space led her to apply for the Mars One mission, is interested in asking the question of what life is. She is primarily interested in looking for signs of life on Mars from a research perspective, saying that finding evidence of either life that once existed or does still exist would be a huge achievement for her.

‘If life can exist on Earth, in an unimaginably large universe, it must also exist or have existed elsewhere,’ said Marais, whose PhD thesis is titled: “Quantum Effects in Photosynthesis”.

More recent research that Marais has been involved in involves the identification of quantum effects in primitive photosynthetic organisms, such as bacteria, which suggests that quantum effects may have played an important role in the emergence of the very first living systems from the inanimate matter of which they are constituted. A description of the emergence of life from the inanimate matter of which it is constituted is one of the greatest open problems in science.

Additionally, Marais’ research into the detection of the molecular precursors of life in interstellar ices suggests that the building blocks of life may have emerged in space and been delivered to Earth by objects such as comets or meteorites.

‘I intend to investigate the extent to which quantum effects played a role in the processes that led to the emergence of life and its molecular precursors,’ said Marais, a project which complements her dream of interplanetary adventure.

Govender (23) intends to go into Astrophysics, having always had a keen interest in astronomy. Govender describes himself as always being up for a challenge, as evidenced by his decision to apply for the Mars One mission.

‘Space and space exploration has always been a dream of mine,’ said Govender on his Mars One profile. ‘To set foot on another planet and pave the way for mankind’s journey into a true space age would be so surreal. I believe that we can responsibly inhabit other planets and advance our knowledge of science along the way. On Mars we would be able to begin a whole new age of astronomy and science.’

Both Marais and Govender are optimistic about the prospect of leaving Earth permanently, since the Mars One project can use existing technology to send the astronauts to Mars and keep them supplied with all they need to live, but does not currently have the technology required to lift them off from Mars and return to earth.

Both candidates have won over the support of their family and friends, who are excited at the prospect of either one or both of them being remembered as the first humans to set foot on Mars. They see this prospect as being well worth the sacrifice of a life on Earth.

If not selected, both candidates could reapply, as the plan is to send crews out every two years after 2024 until a fully-fledged human settlement is established. Rovers will set up the living units in advance of the settlers’ arrival, and the units will be quipped to produce oxygen for breathing and food for the astronauts. According to Marais, a “breakfast of champions” on Mars will consist not only of grains and vegetables, but also of insect-based food, since bugs reproduce quickly and provide a good supply of fats and amino acids.

Whether or not Marais and Govender eventually set foot on Mars, they have captivated the attention of their peers and people all over the country, and hope that their goals of travelling to another planet will inspire new generations of astronomers and scientists in South Africa. The endeavour may seem impossible to some, however, when asked what her response to the risks of the journey would be, Marais replied with a quote from Nelson Mandela, saying that ‘it always seems impossible until it’s done’.